Waste water for fertilizing fields. The history of Old Moscow 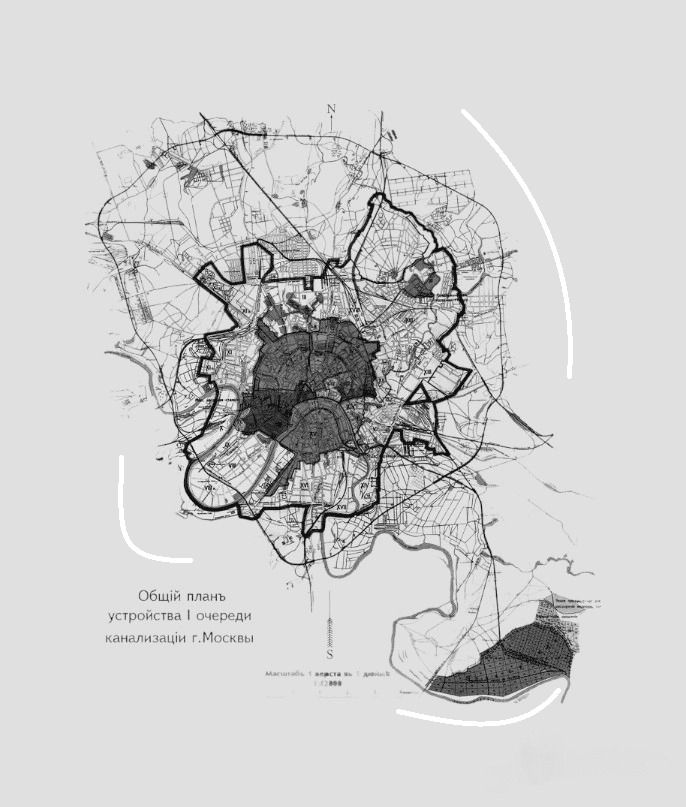 Even cities of the industrial era sometimes dismantled an enlightened attitude to waste. So, in the XIX century, there was an idea to use the heat released during the fermentation of feces for heating the city, and the burned garbage for the production of fertilizers. Finally, a real struggle for water begins: it turns into a commodity, becomes a raw material for the nascent industry, a factor in urban and state policy.
​
Creating a system for collecting, delivering, distributing, and purifying water required huge investments. However, the second part of the task - how to get rid of used water and other waste-turned out to be even more difficult, requiring not only money, but also enormous public efforts.
​
In 1842, the great sanitary reformer in England, Edwin Chadwick, proposed pumping sewage to fertilize fields. Thus, urban waste would be returned back to the city already in the form of food.
Ten years later, the utopian socialist Pierre Leroux (it was known that he used his own excrement as fertilizer) proposed a project called circulus. Leroux planned to introduce an income tax on excrement, as a result of which, in his opinion, productivity would increase, poverty would disappear, and waste would contribute to social prosperity. Victor Hugo, who visited Leroux in Jersey (where both of them were hiding from the persecution of Napoleon III), intended to publish this theory in the novel Les Miserables, a whole part of which is devoted to the sewer - a sewer where Paris, according to the writer, literally threw millions, believing that the city was being cleaned, while in fact he was losing his wealth. By the way, in Les Miserables, Hugo calls the sewer "the womb of Leviathan".
​
Inspired by such ideas, the engineers of the town of Genvilliers founded a fruit and vegetable farm in 1869, which was irrigated with sewage water. Now the population of this city, located on a peninsula in a bend of the Seine below Clichy and Asnieres, exceeds 50 thousand, and in the 1870s it was a village in the middle of a nondescript valley with stunted vegetation, where less than 2 thousand people lived. The enterprise turned out to be extremely successful, and the opponents of sewer irrigation had only one argument left: "Paris will not be able to eat all the vegetables grown on these farms."
In 1878, to the great joy of the French patriots, the municipal authorities of Berlin abandoned the chemical treatment of sewers in favor of the system used in Genvilliers.
​
A year later, Jules Verne mentions filtration and irrigation with sewage when describing the ideal model of a modern city.
​
Even the anarchist Prince Pyotr Kropotkin considered the example of Genvilliers to be the basis for healthy cooperation between the city and the countryside.
​
In Russia, the first irrigation fields, the Lublin irrigation fields, began operating in 1898.
Until the end of the XIX century, there was an export system for removing sewage throughout Moscow: sewage was stored in courtyards - in barrels into which slops were poured, or in pits. The cesspools where they accumulated were wooden log cabins coated with clay for waterproofing, and could not prevent contamination of the soil and water in drinking wells. Goldsmiths went on special carts, raked sewage from the yard pits and poured it somewhere outside the city.
​
Homeowners resorted to various measures to get rid of sewage: they arranged descents into drainpipes, into natural reservoirs, and during rains, liquid waste descended directly onto the streets, spreading an unbearable stench. Lines from numerous factories, workshops, and baths were also added here.
All this created a stench.This state of affairs with the removal of sewage could not satisfy the city authorities.

In 1874, the hydraulic engineer M. A. Popov presented his "Design plans for the sewerage of Moscow" to the city Duma. Despite the high assessment of the project, its consideration was delayed for 13 years.
​
The second project of a group of city engineers, approved in 1892, was recognized as more attractive from an economic point of view:they proposed to sewer Moscow using a separate floating system, in which household and factory wastewater enters the sewer, and atmospheric water enters the drain and then, without purification, into reservoirs.
​
By the way, the solution of the" land " issue cost the city so much that only the amount of interest paid to landowners exceeded the cost of the sewage system provided for by the project.
​
Work on laying the sewerage system began in September 1893, and in 1898 the 1st stage of the Moscow sewerage system came into operation. 219 households were connected to the sewerage system.
At the same time, the Main pumping station was launched, which pumped municipal wastewater in a closed channel to the Lublin irrigation fields - giant sewage treatment plants on the site of the Chaginsky swamp with a total area of about 1000 hectares.
​
By the way, the floodplain in the lower reaches of the Moskva River within the city boundaries has been considered a "cesspool" since ancient times. The fact is that all sewage, garbage, household waste were taken there - to the outskirts - on carts from everywhere, and later sewer pipes were pulled.
The Lublin filtration fields were a system of silt platforms.

Initially, the cleaning of liquid household effluents was carried out according to the type of "botanical site": liquid household waste was poured onto wet soil, in which there were ditches with sand, sewage settled to the bottom of the ditches, and the purified water went through pipes to the Moskva River.

Even vegetables were grown in the irrigation fields after cleaning. According to the testimony of contemporaries: "On these beds, cabbage was three times more than in stores."The famous Russian soil scientist Vasily Robertovich Williams took part in their creation.

This continued until 1914, when the cultivation of agricultural crops was stopped due to the overload of the system, and the fields began to perform exclusively filtration.
Chemical and biological-bacteriological laboratories were equipped in the irrigation fields.
​
With the installation of sewerage, the total mortality decreased – from 30.9-38.6 people per 1000 inhabitants in 1870-71 to 15.1 in 1909, when about 30 thousand possessions were connected to the sewerage, the mortality from typhoid fever sharply decreased.
​
By the way, in 1911, the Moscow sewer system was awarded a Gold medal at the International Exhibition in Brussels.